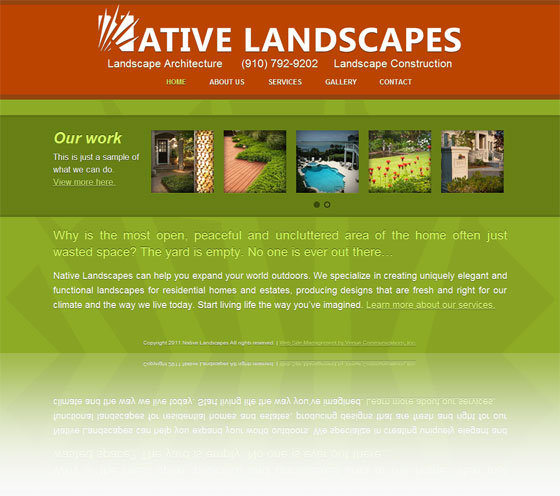 Impulse Web Solutions has just completed the design for Native Landscapes, a Wilmington, NC-based landscaping company.  The website features a sliding filmstrip of images on the homepage and a JQuery shadowbox photo gallery to showcase the company’s work.

The design was a collaboration between the client and our lead designer and went through many design mockups to come up with this simple yet elegant design.  An emphasis was put on making sure the site looks good and functions perfectly on iPhones and other mobile devices.

I just now finished installing the WPtouch iPhone Theme plugin for this blog.

The plugins description is: “A plugin which formats your site with a mobile theme for the Apple iPhone/iPod touch, Google Android, Palm Pre and other touch-based smartphones.”

I highly recommend this now that so many mobile devices are being used for social and even business blogging.

I created a custom icon that will be used when bookmarking.  It creates a really nice icon for the home screen that with one click will open this blog.

So far I have only tested this on my iPhone, but the plugin documentation states it works with “popular touch-based smartphones like iPhoneTM, iPod touchTM, AndroidTM, PalmTM Pre/Pixi, and BlackBerry StormTM.”

This week a friend contacted me to take a look at a template that was purchased for building a photographer web site. He had purchased was a site template built in Flash. Not an HTML site with a Flash plugin, but a 100% Flash design. He wanted to know if I could advise him on how to make some changes to it.

My response was he would need the original .fla file that should be with the template that was purchased. Then he would need Adobe Flash in at minimum the version of Flash the template was built in to edit it. His site, as it is now, has very little chance of showing up in Google, Bing, Yahoo and other search engines for anything other than a search for the domain name, and perhaps the company name if he can get that in the Title tag. After years of trying, Google (and others) still cannot index Flash sites so they have no idea what is in the site.

Most of my clients have a need to rank high in search engines, therefor I have very little experience with Flash. Instead, I use HTML5 and AJAX to create the same stunning visual effects you can achieve with Flash. See examples listed at the bottom of this post.

My advice to my friend was if he wants to show up in searches he should build it in HTML5. If he doesn’t care about his ranking then he’s fine with Flash as long as he can afford to get it edited by a Flash developer. CMS for Flash – haven’t seen it!

One more slam on Flash and I’m done. His site is a big black blank on 2,000,000 iPads and over 50,000,000 iPhones/iPods Touches. Blackberry and Android typically only support lightweight Flash plugins. The proper way to build a pure Flash site is to provide an alternative version for mobile devices and other systems that do not support Flash.

The bottom line is the future for web design is HTML5, Flash is dying fast. Do a few Google searches on that subject.